Yakama Power intends apply solar options to existing buildings to improve energy efficiencies
and is planning to develop a wind demonstration project to gauge if a wind project would be considered by the Yakama Nation.

Some renewable energy technologies are criticized
for being intermittent or unsightly, yet the renewable energy market continues to grow. Climate change concerns coupled with high oil prices and increasing government support are driving increasing renewable energy legislation, incentives and commercialization. New government spending, regulation, and policies should help the industry weather the 2009 economic crisis better than many other sectors. Renewable energy will assist the Yakama Nation in becoming self sufficient, maintaining existing infrastructure, and creating new opportunities in the energy industry.

Hydroelectric Generation
Hydro-electric stations create electricity from the energy released by water falling to a lower level. Dams are used to store water in lakes behind the power station so that there is a constant supply of water. The water is collected and the potential energy of the stored water is converted to kinetic energy as it falls to a lower level. The falling water spins the turbines which in turn spin the generator to create a steady stream of electricity. This effectively converts the kinetic energy of the falling water to mechanical energy, and then to electrical energy.

Co-Generation
In the Co-generation process low grade steam, which is a byproduct of the generation process, is made available as a heat source for other industrial processes e.g. Timber industry. The electricity generated by each of these methods is then stepped up to a higher voltage to make transmission throughout the country more efficient and is then stepped down to a lower, safer voltage for home use.

Solar Generation
Using solar energy has many advantages. The amount of energy that can be harvested from sunlight is many times greater than what can be gathered from any other renewable resource. In just one hour, the earth receives more energy from the sun than the world uses in one year. Additionally, once installed, solar energy collection creates no pollution and requires little maintenance because there are no moving parts.

Solar power is derived from the conversion of solar radiation into electricity using a device called a solar cell. As sunlight is absorbed by the solar cell, an electric potential is created and converted into electricity. Important factors to consider when using solar cells are the efficiency of the device and the total amount of solar radiation the device receives. Efficiency is a measure of how much of the incoming energy from the sun is converted into usable electricity, and can vary between different types of devices. This value is easily specified and will remain constant for a particular device.

Solar radiation, on the other hand, is somewhat predictable at a specific place but varies tremendously based on geographic location, season, time of day, atmospheric interference (e.g. weather), and fluctuations in sun’s chemical reactions. Such values are often averaged over a period of time for the purpose of data management. The data we used, published by the National Renewable Energy Lab (NREL), gives solar radiation in terms of kWh/m2/day across the United States. Therefore, the average value for the net amount of radiation received in terms of raw energy over the course of a day can be recovered for a specific location and used for preliminary estimation of power that can be generated (Equation 1). 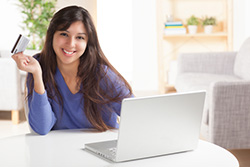